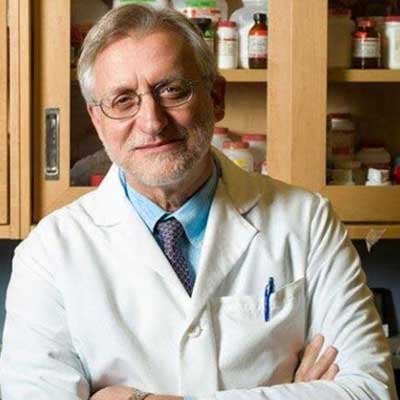 Dr. Theoharis C. Theoharides is professor of pharmacology and internal medicine as well as director of molecular immunopharmacology and drug discovery in the Department of Immunology at Tufts University School of Medicine in Boston, MA. He was born in Thessaloniki, Greece, and graduated with honors from Anatolia College. He received all his degrees from Yale University (BA, cum laude in biology and history of medicine, MS, MPhil, PhD, MD) and was awarded the Dean’s Research Award and the Winternitz Prize in Pathology. He trained in internal medicine at New England Medical Center, which awarded him the Oliver Smith Award recognizing excellence, compassion, and service. He also received a Certificate in Global Leadership from the Tufts Fletcher School of Law and Diplomacy and a fellowship at the Harvard Kennedy School of Government. He has been serving as the clinical pharmacologist of the Massachusetts Drug Formulary Commission continuously since 1986.

In Greece, he served on the Supreme Advisory Health Councils of the Ministries of Health and of Social Welfare, as well as on the board of directors of the Institute of Pharmaceutical Research and Technology. He Chaired an International Committee appointed by the Hellenic Ministries of Education and Health for the establishment of an independent medical school in Greece, and he is a member of the International Advisory Committee for the University of Cyprus School of Medicine. He is also the Director of Health Science Programs and Research for the American College of Greece.

He is a member of 15 academies and scientific societies. He was inducted into the Alpha Omega Alpha National Medical Honor Society and the Rare Diseases Hall of Fame. He has received the Tufts Excellence in Teaching 10 times, the Tufts Distinguished Faculty Recognition Award twice, the Tufts Alumni Award for Faculty Excellence, and the Dr. George Papanicolaou Award. He has also been awarded an honorary doctor of medicine from Athens University and an honorary doctor of sciences from Hellenic-American University, as well as the 2018 Albert Nelson Marquis Lifetime Achievement Award.

Dr. Theoharides is a member of the American Academy of Allergy, Asthma & Immunology. In 2020, he was inducted in the World Academy of Sciences. For his humanitarian efforts, he was honored with Boston Mayor’s Community Award and the 2018 Distinguished Humanitarian Award (Marquis Who is Who), and he was recognized as Archon of the Ecumenical Patriarchate of Constantinople.

He has published over 470 scientific papers (JBC, JACI, JPET, NEJM, Nature, PNAS, Science) with 465 papers in Pubmed (40,984 citations; h-index 97), and three textbooks. He has been placed in the world’s top 2% of most cited authors and as the top-rated expert in the world on mast cells by Expertscape. Dr. Theoharides is also the scientific director of Algonot, LLC (Sarasota, FL) and has helped formulate unique dietary supplements (e.g., ArthroSoft®, BrainGain®, CystoProtek®, FibroProtek®, NeuroProtek®, PureLut®) and a skin lotion (GentleDerm®) containing the novel anti-inflammatory flavonoids luteolin and tetramethoxyluteolin. He has received 37 patents and trademarks, including some covering the use of luteolin in brain inflammation and autism: US 8,268,365 (09/18/12); US 9,050,275 (06/09/15); US 9,176,146 (11/03/15). You can find him on the web at www.mastcellmaster.com and contact him via email at drtheoharides@gmail.com.