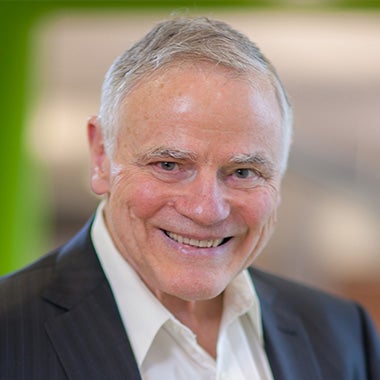 A world-renowned scientist and recipient of the National Medal of Science in 2011, Dr. Leroy Hood co-founded the Institute for Systems Biology (ISB) in 2000 and served as its first President from 2000-2017. In 2016, ISB affiliated with Providence St. Joseph Health (PSJH) and Dr. Hood became PSJH’s Senior Vice President and Chief Science Officer. He is also Chief Strategy Officer and Professor at ISB.

He received his MD from Johns Hopkins University School of Medicine and his PhD in biochemistry from Caltech. Dr. Hood was a faculty member at Caltech from 1967-1992, serving for 10 years as the Chair of Biology. During this period, he and his colleagues developed four sequencer and synthesizer instruments that paved the way for the Human Genome Project’s successful mapping and understanding of the human genome. He and his students also deciphered many of the complex mechanisms of antibody diversification. In 1992, Dr. Hood founded and chaired the Department of Molecular Biotechnology at the University of Washington, the first academic department devoted to cross-disciplinary biology.

Dr. Hood is currently carrying out studies in Alzheimer’s Disease, cancer, and wellness. He is pioneering a 1 million patient genome/phenome project for Providence St. Joseph Health and is bringing scientific (quantitative) wellness to the contemporary U.S. health care system.

Dr. Hood has played a role in founding 15 biotechnology companies including Amgen, Applied Biosystems, Arivale, and Nanostring. He has co-authored textbooks in biochemistry, immunology, molecular biology, genetics, and systems biology.

In addition to having received 18 honorary degrees from prestigious universities in the U.S. and abroad, Dr. Hood has published more than 850 peer-reviewed articles and currently holds 36 patents.

Dr. Hood is the recipient of numerous national and international awards, including the Lasker Award for Studies of Immune Diversity (1987), the Kyoto Prize in advanced technology (2002), the Heinz Award for pioneering work in Systems Biology (2006), the National Academy of Engineering Fritz J. and Delores H. Russ Prize for developing automated DNA sequencing (2011), and the National Academy of Science Award for Chemistry in Service to Society (2017).