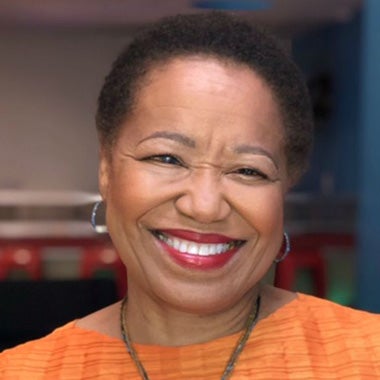 Gail Christopher, DN is an award winning social change agent with expertise in the social determinants of health and well-being and in related public policies. She is known for her pioneering work to infuse holistic health and diversity concepts into public sector programs and policy discourse. Gail Christopher, DN recently retired from her role as Senior Advisor and Vice President at the W.K. Kellogg Foundation (WKKF), where she was the driving force behind the America Healing initiative and the Truth, Racial Healing and Transformation effort. Gail Christopher, DN also served as Kellogg’s Vice President for Program Strategy and worked on place-based programming in New Orleans and New Mexico. In 2015 she received the Terrance Keenan Award from Grantmakers in Health. She chairs the Board of the Trust for America’s Health. In 2019, she became a Senior Scholar with George Mason University’s Center for the Advancement of Well-Being. Gail Christopher, DN also became the Executive Director of the National Collaborative for Health Equity in November 2019.

She is the visionary for and architect of the WKKF led Truth Racial Healing and Transformation (TRHT) effort for America. TRHT is an adaptation of the globally recognized Truth and Reconciliation Commission (TRC) model. TRHT evolved from the decade long WKKF America Healing, racial equity and racial healing initiative, designed and led by Gail Christopher, DN. Over the last ten years she has had responsibility for several other areas of foundation programming. These include, Food, Health and Well-Being, Leadership, Public Policy, Community Engagement and place-based funding in New Orleans and New Mexico.

In August of 2017, Gail Christopher, DN left her leadership position with WKKF to launch the Maryland based Ntianu Center for Healing and Nature; and to devote more time to writing and speaking on issues of health, racial healing and human capacity for caring. She is currently Chair of the Board of the Trust for America’s Health.

Gail is a nationally recognized leader in health policy, with particular expertise and experience in integrative health and medicine, social determinants of health, health inequities and public policy issues of concern to our nation’s future. Her distinguished career and contributions to public service were honored in 1996 when she was elected as a fellow of the National Academy of Public Administration. In 2007 she received the Leadership Award from the Health Brain Trust of the Congressional Black Caucus for her work in reducing racial and ethnic health disparities; in 2009 she was named a Society for Public Health Education (SOPHE) Honorary Fellow – the highest recognition given to a non-SOPHE member, who has made significant contributions to health education and to public health; in 2011 she was awarded the “Change Agent Award” by the Schott Foundation for Public Education; in 2012 she was the recipient of the Association of Maternal & Child Health Programs (AMCHP) John C. MacQueen Lecture Award for her innovation and leadership in the field of maternal and child health. Most recently in 2015 she was the recipient of the Terrance Keenan award for Grantmakers in Health. She is chair of the board of the Trust for America’s Health.

Gail has more than 30 years of experience in designing and managing national initiatives and nonprofit organizations. She brings extensive knowledge and experience in creating a comprehensive approach to well-being and is nationally recognized for her pioneering work to infuse holistic health and diversity concepts into public sector programs and policy discourse.

A prolific writer and presenter, Gail is the author or co-author of three books, a monthly column in the Federal Times, and more than 350 articles, presentations and publications.

Prior to joining the foundation, Gail was vice president of the Joint Center for Political and Economic Studies’ Office of Health, Women and Families in Washington, D.C. There, she led the Joint Center Health Policy Institute, a multi-year initiative created to engage underserved, racial and ethnic minorities in health policy discussions. Previously, she was guest scholar in the governance studies department at The Brookings Institution in Washington, D.C. and executive director of the Institute for Government Innovation at Harvard’s John F. Kennedy School of Government in Cambridge, Massachusetts. She has additional experience at the National Academy of Public Administration, Howard University School of Divinity, Americans All National Education Program and Family Resource Coalition of America. She has also launched, led and managed three public commissions. Under her sponsorship, the landmark Dellums Commission research into conditions faced by young men of color produced policy recommendations to reduce racial and ethnic health disparities.

Gail holds a doctor of naprapathy degree from the Chicago National College of Naprapathy in Illinois and completed advanced study in the interdisciplinary Ph.D. program in holistic health and clinical nutrition at the Union for Experimenting Colleges and Universities at Union Graduate School of Cincinnati, Ohio.